We are starting the selection process in sorting out the Goode Ideas for John Lee.

04 Modern Wealth is the Quality and Quantity of Meaningful Economic Activities
https://youtu.be/vaESEy5HK4E

08 The Peaceful Competition between the Two Camps
https://youtu.be/VGNCVG61_5Q
回頂端

19 A pitfall to avoid
https://youtu.be/gDB_WYW7eww

I went fishing and caught the usual number of big fishes (around 10 in about 3 hours). As I was ready to leave, a Mr. Ho approached me and wanted a competition. He said that He improved my technique and would beat me easily.

I said that I was interested and consented to a match.

As expected, the pile of bread floating at the surface attracted a group of fishes. The fishes competed for the feast and some swallowed the hooks.

My technique was to put in a small bait of bread and throw towards the middle of the pond. Occasionally, I threw a few pieces of bread to attract the fishes. That technique worked for me most of the time. I was content.

But his improved technique was much more effective. He was very careful with multiple hooks. He could not use the net to bring in the caught fishes as the multiple hooks would get tangled in the net. He was busy all the time - preparing the bait, catching the fishes, unhooking them and repeating the process.

His improved technique easily beat mine.
(1) The pile (1 to 4) pieces of whole bread definitely attracted more fishes.
(2) The competition amongst the fishes lowered the guard of the fishes.
(3) Making the small hole in the pile of bread and embedding the hooks needed some skill.
(4) The commotion easily attracted some large fishes. He was able to catch a few really large ones.

That competition reminded me of the Super Silicon Valley Mentality. Everything we intend to do is third class. it can be improved to second or first class.

I was happy with my third class technique for years as I could catch around 6 - 10 fishes on an average trip. Now I have something new to try. A small improvement is to remove the back hooks倒勾 and use larger hooks to focus on catching the bigger fishes. 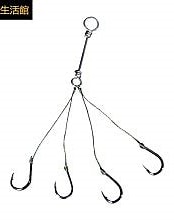 Bought the hooks. Shall try the technique of Mr. Ho. This is the China Speed.

I understand that this is not fair to the Fishing Farm Owners.

The use of Multiple Hooks is banned in some Fishing Farms. I treat this as an exercise in improving the fishing technique. Try it out and may recommend banning later.
回頂端

The multi-hook technique will be banned but he allowed me to try this time. The technique worked but I would not use it again. This brings up a good point - some techniques work but will harm the interests of others. Society has to do a balance.
回頂端

Is it possible to use only 1 hook and get the good results?

Once we focus on the two above questions, we have many possible solutions. I have a simple one. I shall do the home-made device and try it out. Meanwhile, I shall let you all try your solutions. This is the spirit of Super Silicon Valley Mentality. We can always improve on existing ways...
回頂端

Retiree A said: "Your fishing example reminded me of the dropping an egg from the third floor. The challenge is to put packaging so that the egg does not break."

Retiree B said: "Innovation comes from challenges. Israel is good in water conservation because it is in a desert environment. They appreciate the good idea of using Pipe System instead of Artificial River System much more."

Retiree C said: "Innovation is very easy if one pays attention to details. I like the idea of helping Developing Nations in Africa. Simple agricultural techniques will help them. It is just a matter of modifying known technology. I like the idea of putting "lime" to prevent insects eating the seeds."

Retiree A said: "We can dream up dozens of challenges for the Hong Kong Youngsters aged 13 or so. I still remember my creativity at that age."

Retiree B said: "Tell us more."

Retiree A said: "I sharpened chopsticks and got scolding from my parents. I set traps to capture sparrows. I changed the spring on my toy guns so that it could shoot much farther. I used mirror to shine on girls to get their attention. It was fun."
回頂端
回覆文章
7 篇文章 • 第 1 頁 (共 1 頁)